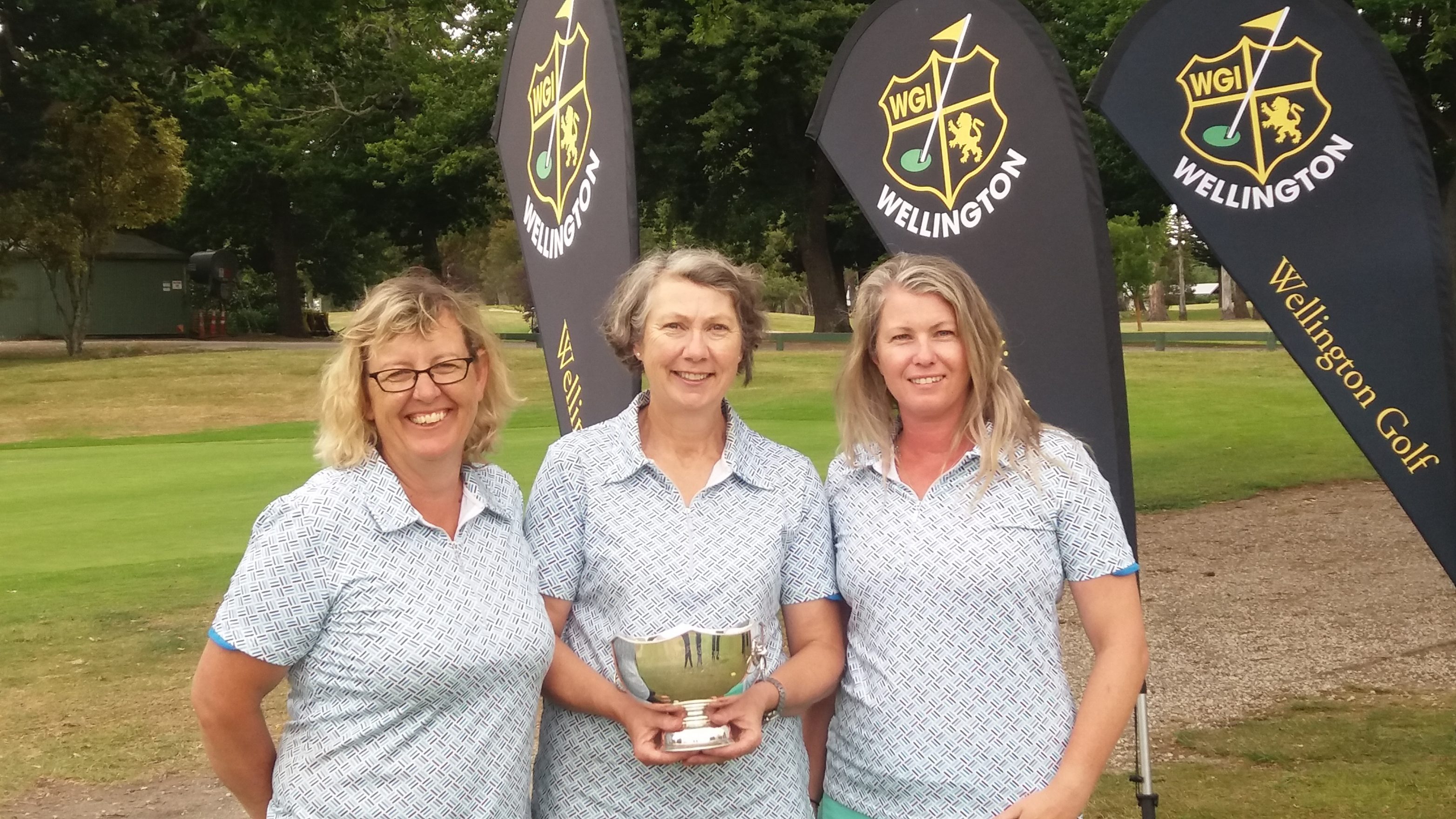 Bronze turned to gold when the trio from Martinborough won the Womens 36 hole Team stable ford silverware at the Champion of Champions held at home on the weekend. Our 2017 Bronze Champion Carol Parkinson tied for 1st place with a Gross 178  with Ange O’Gorman from Titahi Bay. More importantly Carol  contributed to the team 48 stable ford points . Congratulations to you Carol for being named co winner of the  2017 Wellington Bronze Champion.

Karen Shaw loved the challenge playing stable ford off the stick and repeated her first 18 holes with another finishing  runner up in the Bronze Nett with a Nett 133 and contributing 38 stable ford points. Pip Kirk our Silver Champion played well to contribute 54 stable ford points from her 36 holes, securing the team title with a total of 140 points, seven shots clear of Team Royal Wellington. Zhuoyl Hu their star player played sublime in the morning with a Gross 72 and her afternoon round of Gross 79 was enough to keep her in the box seat and the 2017 title of Silver Champion with a Gross of 151. Sher Gibbons her team mate was 2nd equal in the Bronze Nett and Cris Mc Gechan came in with enough stable fords for their team to take overall Runner-up in the Teams section.
Winner of the Best Nett in the Silvers was Karen Gray with Rounds of 64+75 Nett 139 on a c/b to Mastertons Sereana Phillipps 66+73 Nett 139. The Best Nett in the Bronze went to Marion Elliot of Miramar with (Rounds of 65+62)  Nett 127. Shannon was placed 3rd in the teams.
The 9 hole group and and the 18 hole Women held their Combined AGM and prize giving last Wednesday. It was great to see a number of past members come along to help celebrate the successes of 2017.
Results of the Nine hole group included The Most Improved player going to Lizzie Goodall, Best Stableford Ann Renall, Wilson Cup for Putting Sherryl Howie, who also picked up the Trophies for the Most Points overall, The Clark Shield for Shoot out and along with her playing partner Gaylene Selby Neal  the Thurlow Cup 4BBB. Best Nett went to Sandra Burgess and Jenny Tosswill won the Par Cup and the 2017 Champion A division. Her sister Debbie Coom won the B division and Sherryl Howie won the Handicap Championships.
Jaclyn Kras, Angela Busby, Karen Shaw, Kris Chamberlain and Sylvia Beavis were kept on their feet collecting the Silver in the womens 18 hole division.
The Bidwill Leckie exchange on Sunday went the way of the hosts, the Martinborough lads loved the tee to green play but stuttered when it mattered most- the putting. Hospitality was top notch and the trip home on the bus was merry.
The Club is hosting a Christmas Tournament on Saturday with the Club prize giving to follow. The Mens shootout is on Sunday and there is a 8 way chip off for the last 4 places.