This week saw the exciting unveiling of a new mower in Martinborough.  The “Thursday Club” players are gathered around a new greens mower which has been purchased due to the kindness of the late Ian Henderson (nicknamed Spacey) who left a very generous bequest to the club. Ian was a real stalwart of Martinborough for many years holding roles as president and patron during his golfing life. He was also a life member and an Eagle. His family presented the bequest at a recent tournament. The mower has been appropriately branded to his memory. 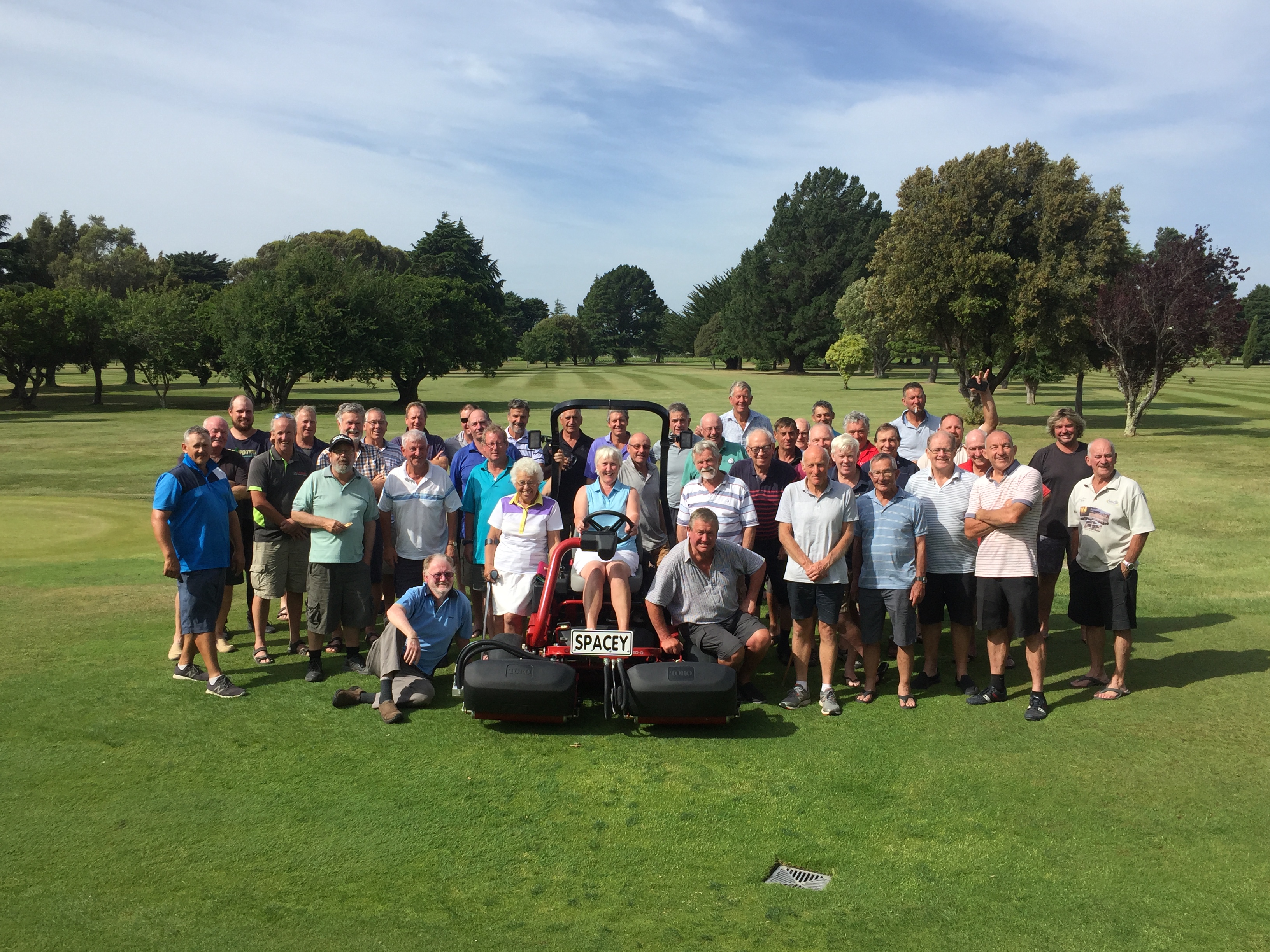 Mens Shootout Final
It was a balmy day for the men’s shoot-out on Sunday.  Fresh from driving over the Hill Kevin Williams lost in a six-way chip on the first hole. After a wayward tee shot, followed by some drains, Shane Hartnell was next to leave. Number 3 is always tricky and Pete Griffiths second wanted to wander right into the vines.  Phil Eberlien short of the Womens Tee was not what he had in mind on his departure card at gate four. Bull Hill saw a three-way chip off with John Errington given a yellow card. Another chip off on number 6 saw a six-inch differential with debutante Doug Ferguson told to try again next year.  Rounding the Oaks on number 7 the Referees were forced to bring out the tape measure and with a dead heat on the first chip, it was Dale Scrimshaw who was shown the door.  Bob Schofield departed after a three-way chip on number 8. Richard Mills planted a stunning drive down the fairway on nine only to lose with a short chip. The tenth caused angst to first timer Rob Lopez, he learnt that you just go for it. Another soul to fall from a wayward tee shot and no shots Colin Whibley-Smith hopped on the trailer at 11.  Ro Griffiths was one of two to hit OB on 12 unfortunately his recovery was not good enough to stay the distance. The 13th and Glen Harper found himself in a five-way chip off and there were no ands for him. Another chip off on 14 and Gary Cuttance was given the order. On the 15th four of the five remaining had another chip off, this time Trevor Petersen was told to park his cart.  Onto the 16th and the two players without shots chipped off with John Warners chip four inches too long.  Going up 17th the players were clearly tiring at this stage with Alec Donderman finally faltering after a magnificent 16 holes.  The last two standing were Guy Warmsley and Mark Lucock. Great drives from both with solid seconds, their third shots very average, Guy missed his four-foot putt to hand Mark the Stacey Hartnell Memorial Trophy for 2019. Not bad considering he survived after having a nine on number two and being a party to numerous chip offs.   Congrats to Mark and everyone who made the day very entertaining – Thanks to Tora for the write-up!